Do you know this destination? 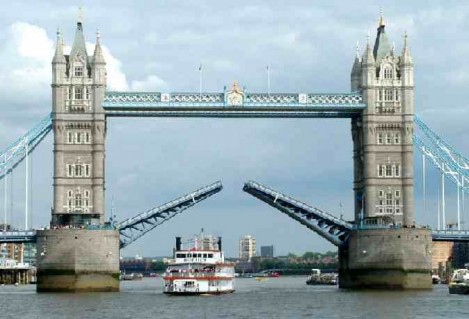 Don't miss out on having a walk over this magnificant bridge. Looking up at the towers from the road is a dizzying experience. It can be somewhat crowded and this makes taking a go...Read more »

Tower Bridge is famous the world over.

Designed by Sir Horace Jones and opened in 1894, Tower Bridge is famous the world over. Due to the volume of river traffic at the time, Tower Bridge was designed to have twin bascu...Read more »

Tower Bridge is the most famouse bridge.

London´s Tower Bridge is one of the most recognizable bridges in the world. Its Victorian Gothic style stems from a law that forced the designers to create a structure that would b...Read more »

We walked over Tower Bridge to get to the Tower of London. Absolutely fantastic, a great piece of architecture and a must see in London. Stop and look up and down the river to get ...Read more »

London was still a thriving port in 1894 when elegant Tower Bridge was built. Designed to be raised to allow ships to pass, electricity has now taken over from the original steam e...Read more »

This is one of the iconic structures of London – so much so that an urban myth has it that the rich American who bought London Bridge to erect in the Arizona desert actually though...Read more »